Larry Norman passed away over the weekend.

Goodbye and thank you for the many years of encouragement, insight, and leadership as you followed in His footsteps.

Here is the letter he wrote the day before he died:

"I feel like a prize in a box of cracker jacks with God's hand reaching down to pick me up. I have been under medical care for months. My wounds are getting bigger. I have trouble breathing. I am ready to fly home.

My brother Charles is right, I won't be here much longer. I can't do anything about it. My heart is too weak. I want to say goodbye to everyone. In the past you have generously supported me with prayer and finance and we will probably still need financial help.

My plan is to be buried in a simple pine box with some flowers inside. But still it will be costly because of funeral arrangement, transportation to the gravesite, entombment, coordination, legal papers etc. However money is not really what I need, I want to say I love you.

I'd like to push back the darkness with my bravest effort. There will be a funeral posted here on the website, in case some of you want to attend. We are not sure of the date when I will die. Goodbye, farewell, we will meet again.

Goodbye, farewell, we'll meet again
Somewhere beyond the sky.
I pray that you will stay with God
Goodbye, my friends, goodbye."

"Let God send the fire of His Spirit here, and the minister will be more and more lost in his Master. You will come to think less of the speaker and more of the truth spoken....

Suppose the fire should come here, and the Master be seen more than the minister, what then? Why, this church will become two, three and four thousand strong.... We shall have the lecture hall beneath this platform crowded at each prayer meeting, and we shall see in this place young men devoting themselves to God; we shall find ministers raised up, and trained, and sent forth to carry the sacred fire to other parts of the globe.... If God shall bless us, He will make us a blessing to multitudes of others.

Let God but send down the fire, and the biggest sinners in the neigbbourbood will be converted; those who live in dens of infamy will be changed; the drunkard will forsake his cups, the swearer will repent of his blasphemy, the debauched will leave their lusts...dry bones be raised, and clothed afresh. And hearts of stone be turned to flesh.

"I do not come to this pulpit hoping that perhaps somebody will of his own free will return to Christ. My hope lies in another quarter, I hope that my Master will lay hold of some of them and say, ‘you are mine, and you shall be mine, I claim you for myself.’ My hope arises from the freeness of grace, and not from the freedom of the will."

-- Charles Spurgeon, his first sermon in the Metropolitan Tabernacle, March 31, 1861

5 Reasons Why the Emerging Church is Receding

Here is an interesting post written by Trevin Wax from the Kingdom People Blog. I hope his assessment of the Emerging Church is right!:

Has the Emerging Church begun to recede? I say yes, and here are five reasons why.

1. The Emerging Church does little evangelism.

Surely the Emerging Church is not the only segment of Christianity that fails in the evangelistic task. So I’m not throwing stones here. I am merely pointing out that which some Emerging leaders (Scot McKnight, Dan Kimball and others) have been saying for a long time. The Emerging Church isn’t making many converts.

What the Emerging Church has succeeded at is reaching young, disgruntled Christians who are fed up with the problems in traditional evangelicalism.

Another issue that affects evangelism is the lack of clarity and focus regarding the nature of salvation. With traditional doctrines such as the exclusivity of Jesus Christ and the existence of hell being questioned (and, in some quarters, outright denied), evangelism is no longer a priority. Saved… from what? Saved… by whom?

2. Some Emerging leaders have embraced a disturbing lack of clarity on key doctrinal and social issues.

The unchurched twenty-somethings that I meet and talk to want answers. They don’t get excited about how Christian theology is mysterious. They are not impressed with people who talk about how “they don’t have the answers” and just want to “journey” with them and ask questions.

Some Christian twenty-somethings are a different story. Reacting against the narrow, cookie-cutter, Sunday-School answers they have been fed in evangelical circles, some Christians enjoy the embrace of mystery and the idea that no one has all the answers.

But most of the non-Christians that I meet with (and most of the Christians I minister to as well) want to do business with serious theological issues, like Why do bad things happen to good people? Why do Christians believe that Jesus is the only way to God? How can a good God send people to hell? Isn’t it intolerant to proselytize? They don’t want to hear pontifications on how “these are complex questions… maybe we can search together and eventually find some answers.” They want to know what Christians believe.

In a world of gray, black-and-white answers are not a turn-0ff to unbelievers. They are appealing if explained with grace and love.

Some Emerging leaders consistently refrain from speaking out on important moral and theological questions of our day. Asking for a moratorium on making pronouncements the Bible has already made may sound humble and gentle, but in reality, it leaves people struggling with sin and guilt without a clear word from God.

3. Many who initially intrigued by the Emerging conversation are now distancing themselves from Emerging theology.

The whole “missional” movement is a case in point. Here you have young, hip pastors in their thirties who might be called “postmodern” in their style of worship, but who no longer want to the baggage of theological liberalism that the term “Emerging” is beginning to connote.

When dozens of successful pastors/writers/bloggers who were initially intrigued with the Emerging Church begin shedding the name and throwing off the baggage, it’s a clear sign that the conversation is ending (or at least becoming more narrow in its tendency toward liberalism).

4. Some aspects of the Emerging Church look faddish and fleeting.

The Emerging Church is about contextualization and practice. How do we contextualize the gospel for a postmodern world?

Unfortunately, some Emerging Churches look like the continuation of the Seeker movement, even as they decry the Seeker-focused mindset. Incense, candles, icons. These aspects of worship might be helpful for ministry to postmodernists somewhere. They would look silly in rural Tennessee. Contextualization does not always look the same, something the Emerging Church conversation affirms in theory, but often ignores in practice.

Now that the Emerging Church is becoming known a “style of worship” or a “way of doing church for young people,” the movement has moved out of the realm of contextualization and has joined the evangelical faddishness it once protested.

Think of Jesus Movement of the 1970’s. Replace Vietnam with Iraq, beards with goatees, and contemporary music with liturgy. (I’m overstating my case here, but you get my drift.)

5. Evangelicalism is beginning to address the good questions raised by the Emerging movement.

The Emerging Church is a protest movement and some of the protests have been good and necessary. As I’ve written before about fundamentalism, movements that find their identity in protesting usually find smaller and more insignificant things to protest about.

Now that evangelicalism has begun listening to the Emerging Church’s concerns about ecclesiology, Kingdom theology, incarnational spirituality, ancient rituals, etc., we are beginning to see the best that Emerging has to offer being incorporated into the larger stream of evangelicalism. As that happens more and more over the next few years, the Emerging Church as a movement will be more and more unnecessary.

Is the Emerging Church gone? No. Not yet.

Has its influence begun to wane? Yes.

Is the movement on the wrong track? Many of the leaders have deconstructed orthodox Christianity so much that there is no foundation on which to build. That’s a problem. And that’s why so many are jumping off the Emerging bandwagon.

The early Emerging leaders saw that traditional evangelicalism looks a lot like the Titanic, slowly taking on water and sinking towards irrelevancy. So the leaders shot up some flares and boarded a life-raft. Unfortunately, the life-raft seems to have more holes in it than does the big ship. Let’s hope the conversation ends before the boat sinks with people on it.

Has it accomplished anything good? Yes. Perhaps that’s the best news of all. We’re seeing the receding of a movement that has served its purpose - reawakening evangelicals to the necessity of the Church and the importance of being the Church to the world.

Hear it for yourself...

Psalm 12:8 says, 'The wicked prowl on every side, When vileness is exalted among the sons of men.'
Do we wonder why the nation staggers? We have ‘stars’ that sing of lust and unbridled violence. We have leaders who claim compassion and yet live lives of immorality and debauchery. Divorce is our answer to conflict not mercy and sacrifice. We make it easy and affordable for young women to bear children without the man God says should head the home, while our churches pay more attention to numbers than the Law God gave to protect His people. 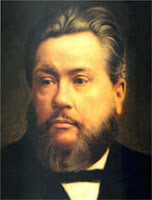 "To try to win a soul to Christ by keeping that soul in ignorance of any truth, is contrary to the mind of the Spirit; and to endeavor to save men by mere claptrap, or excitement, or oratorical display, is as foolish as to hope to hold an angel with bird-line, or lure a star with music.

The best attraction is the gospel in its purity. The weapon with which the Lord conquers men is the truth as it is in Jesus. The gospel will be found equal to every emergency; an arrow can pierce the hardest heart, a balm which will heal the deadliest wound. Preach it, and preach nothing else.

Rely implicitly upon the old, old gospel. You need no other nets when you fish for men; those your Master has given you are strong enough for the great fishes, and have meshes fine enough to hold the little ones. Spread those nets and no others, and you need not fear the fulfillment of His Word, "I will make you fishers of men".

Who am I? Who am I...really? And how can I know? The world wants to conform me into its image, while God's Spirit within tells me I am so much more. How can I find clear answers to my identity as a Christian?
Gratefully, we go to God's Word to discover and delight in who we are because of Christ. We want you to walk in victory. Focusing on who we are as children of God, we'll rely on our Heavenly Father's truthful words to build a proper perspective of who we really are.

Taken from a post from Calvary Chapel, Ft Lauderdale, FL

Psalm 2:12 Kiss the Son, lest He be angry, And you perish in the way, When His wrath is kindled but a little. Blessed are all those who put their trust in Him.