Declaring War on "the Sinner's Prayer" by Paul Washer

THE WAY WE APPROACH TRUTH

"The present chasm between the generations has been brought about almost entirely by a change in the concept of truth. Wherever you look today the new concept holds the field. The consensus about us is almost monolithic, whether you review the arts, literature or just simply read the newspapers and magazines.... On every side you can feel the stranglehold of this new methodology—and by ‘methodology’ we mean the way we approach truth and knowing. ... And just as fog cannot be kept out by walls or doors, so this consensus comes in around us, till the room we live in is no longer distinct, and yet we hardly realize what has happened....

"Young people from Christian homes are brought up in the old framework of truth. Then they are subjected to the modern framework. In time they become confused because they do not understand the alternatives with which they are being presented. Confusion becomes bewilderment, and before long they are overwhelmed. This is unhappily true not only of young people, but of many pastors, Christian educators, evangelists and missionaries as well. So this change in the concept of the way we come to knowledge and truth is the most crucial problem... facing Christianity today.... The shift has been tremendous."

Environmental Sinners in the Hands of an Angry God

Here is a good article by Chuck Colson from thechristianpost.com on our society's warped view on the issue of environmentalism:


These are discouraging times for environmentalists. The momentum to adopt sweeping measures to combat man-made global warming has slowed, even ground to a halt in some places.

Australia and New Zealand, for example, have rejected and repealed their attempts to reduce CO2 emissions. And the French public is up in arms over the government’s plan to impose a “carbon tax.”

Even after all the scare stories, people are having second thoughts about the cost of-or even the need for-reducing greenhouse gas emissions. What’s needed, according to one prominent environmentalist, is a more reliable source of motivation-that is, religious belief.

At the British Science Association Festival, Lord May, the group’s president, said that population growth, climate change, and other environmental offenses “threaten our existence on this planet.”

This litany is a familiar one whose power, judging by recent events, has diminished. May, the former chief science adviser to the British government, told attendees that better motivation for changing behavior is needed.

So what better motivator than religion? May noted that “religion had historically played a major role in policing social behavior through the notion of a supernatural ‘enforcer.’” Since “religion may have helped protect human society from itself in the past,” it may be able to do it again by invoking this “supernatural punisher.”

Actually, what May wants isn’t so much the threat of punishment as the respect for authority and the obedience produced by religion, Christianity in particular. If people won’t reduce their carbon emissions for the sake of Mother Earth, perhaps they will do so for their Heavenly Father.

Mind you, Lord May is an “avowed atheist.” Still, as the British magazine Spiked summed it up, “desperate times call for desperate measures.”

For people who believe that “we are already exceeding the ecological footprint which Earth could sustain,” having others invoke a non-existent deity is a small price to pay for averting catastrophe.

The transparent cynicism of this appeal is almost amusing-what’s not is the willingness of religious people, including some Christians, to play along.

In providing a religious rationale for the policies of people like Lord May, they are not, as they suppose, caring for creation. As Robert Acuff pointed recently pointed out at our new website, ColsonCenter.org, the kind of environmentalism espoused by May and others is a kind of idolatry. It elevates the creation above the Creator-and everything else.

As I have said before, for this kind of environmentalism, the problem is people. “Nature” can only thrive if human beings are diminished. It’s why a new study by the London School of Economics, revealingly entitled “Fewer Emitters, Lower Emissions, Less Cost,” concludes that contraception is the most cost-effective way to reduce global warming.

Christians ought to have no part in promoting this kind of anti-human environmentalism. If May and company desire the aid of a deity, well, their own idol will just have to do.

The infamous date of 9/11 is about to be hijacked. This effort to reshape the American psyche has nothing to do with healing the nation and everything to do with leading the nation along the path of the radical transformation of America. The president signed into law a measure in April that designated September 11 as a National Day of Service.

September 11 is hardly a sacred day. Those days belong to God. But it is one of the most memorable days in American history when 3,000 Americans died a horrible death just for being Americans. So what's wrong with the plans being made for this solemn day?

President Obama was counting on two Marxists who blame America for the 9/11 terrorist attacks to help turn September 11 from a day of solemn remembrance into an unseemly celebration of radical environmentalism and big government. One of them was Van Jones, a radical Marxist who thankfully stepped down this past weekend after Glen Beck, Sean Hannity, and others revealed his perverse connections. The other is Lennox Yearwood, an ordained minister of the Church of God in Christ who is also a Marxist, wishing America no good.

As stated in The American Spectator, "about 60 groups including those associated with Yearwood and Jones, are planning to help the Obama administration greenwash the meaning of 9/11. They want to turn each September 11 into a National Day of Service focused on the importance of bicycle paths, ethanol, carbon emission controls, putting solar panels on your roof, and radical community organizing." Some of those groups are ACORN, the AFL-CIO, Friends of the Earth, Rainbow-PUSH Coalition, the Urban League, National Coalition on Black Civic Participation, and the unsavory left-wing pressure group Color of Change.

Though Jones stepped down a few days ago, one has to wonder why he was one of the appointees in the first place. What kind of judgment does a person have to appoint a Van Jones to a committee who after 9/11 stood with the terrorists? Just one day after 9/11, he held a vigil in which he expressed solidarity with Arab and Muslim Americans as well as "victims of U.S. imperialism around the world."

World Net Daily reports those who are opposed to health care reform are to be blasted as "right-wing domestic terrorists" on 9/11. As The Heritage Foundation says, "The Obama team has designed September 11 as the day to liken conservatives to al-Qaida terrorists."

The antics of the religious Left are not much better. The appointed guru of this movement is Jim Wallis, himself a Communist. Shane Claiborne, writing for Jim Wallis's magazine Sojourners, suggests remembering 9-11 by donating to Christian Peacemaking Teams (CPT). Clairborne writes,

Sadly, this comes down to politics. The Left believes that 9/11 is a "Republican day" because it focuses on issues like patriotism, national security, and terrorism. According to the Left, 9/11 was long ago hijacked by Republicans and their enablers and unfairly used to bludgeon helpless Democrats at election time. The current plan is to turn a "day of fear" that helps Republicans into a day of activism called the "National Day of Service" that will help the Left. Nihilistic liberals are planning to drain 9/11 of all its real meaning.

September 11 is a national day of mourning and not a day for service projects led by hard-core Leftists and Marxists. Taking the focus off the events of 9/11 disrespects and dishonors the memory of those who died. But we must never forget that God had His hand on America that day. The terrorists had hoped to kill hundreds of thousands. Their plans were foiled. As horrific as the day and its aftermath were, remember that it could have been 100 times worse.

Rather than politicizing this event, how about spiritualizing it? Use the time to pray for America and thank God that He has kept us safe for eight years. How much longer will He have mercy on this nation?

And remember that 3,000 people got up that morning thinking life would go on a lot longer for them. It came to an abrupt and agonizing end. The same could happen to you. Eternity spent in the right place will be glorious. Eternity spent in the wrong place is unthinkable because forever is a very long time. If you are unsure of your salvation, I encourage you to turn your life over to the Lord Jesus today -- while there is still time. There may not be time tomorrow. 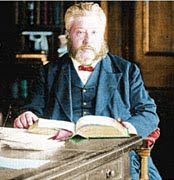 "JESUS, BEARING HIS cross, went forth to suffer outside the gate. The Christian’s reason for leaving the camp of the world’s sin and religion is not because he loves to be singular, but because Jesus did so; and the disciple must follow his Master.

Christ was “not of the world.” His life and His testimony were a constant protest against conformity with the world. Never was such overflowing affection for men as you find in Him; but still He was separate from sinners.

In like manner Christ’s people must “go out to Him.” They must take their position “outside the camp,” as witness-bearers for the truth. They must be prepared to tread the straight and narrow path. They must have bold, unflinching, lion-like hearts, loving Christ first, and His truth next, and Christ and His truth beyond all the world. Jesus would have His people “go forth outside the camp” for their own sanctification.

You cannot grow in grace to any high degree while you are conformed to the world. The life of separation may be a path of sorrow, but it is the highway of safety; and though the separated life may cost you many pangs, and make every day a battle, yet it is a happy life after all.

No joy can excel that of the soldier of Christ: Jesus reveals Himself so graciously, and gives such sweet refreshment, that the warrior feels more calm and peace in his daily strife that others in their hours of rest. The highway of holiness is the highway of communion. It is thus we shall hope to win the crown if we are enabled by divine grace faithfully to follow Christ “outside the camp.”

The crown of glory will follow the cross of separation. A moment’s shame will be well recompensed by eternal honor; a little while of witness-bearing will seem nothing when we are “forever with the Lord."