A “Shift” Is Coming

"Please note the similarities between Emerging author/speaker Brian McLaren’s campaign and message and that of this cadre of outspoken New Spiritual/New Age teachers and leaders. Such New Age luminaries as Marianne Williamson, Dennis Kucinich and Deepak Chopra are featured on this short film, The Shift. (Note the title.) Brian McLaren’s site is called DeepShift.org. They’re all about a shift into a new paradigm."

"We are in the middle of the biggest social transformation in human history, The SHIFT. At this critical point, it is imperative we make the masses aware of this global movement quickly. This evolutionary phenomenon is broader and deeper than the most visible SHIFT, the environmental movement. It involves our very understanding of who we are as human beings, and our responsibility to the world and to life itself."

Now let’s shift to McLaren’s website where he says the following:

"We Are in Deep Shift.

A time of transition
rethinking
re-imagining
and re-envisioning

Brian McLaren, Marianne Williamson and company sound alike because they’re working on the same team. They are the heralds of the coming cosmic christ, a christ alien to the Scriptures and one who is at war with the Lord Jesus Christ. Those who are wise will see this and help warn others of these prophets of anti-Christ.

"There is a great deal of worldliness, and earthly-mindedness, and covetousness among the professing Christians of our day. They are worshipers of the golden calf! O sirs! the world is all shadow and vanity. The world is like Jonah's gourd--a man may sit under its shadow for a time, but it soon decays and dies.

The main reason why many professors dote upon the world, is because they are not acquainted with a greater glory. If the heart of man is not filled with God--it will be filled with the world, the flesh and the devil."

"The preaching and teaching of a false prophet does not emphasize repentance in any real sense. It has a very wide gate leading to salvation and a very broad way leading to heaven. You need not feel much of your own sinfulness; you need not be aware of the blackness of your own heart. You just "decide for Christ" and you rush in with the crowd, and your name is put down, and is one of the large number of 'decisions' reported by the press. It is entirely unlike the evangelism of the Puritans and of John Wesley, George Whitefield and others, which led men to be terrified of the judgment of God, and to have an agony of soul sometimes for days and weeks and months. John Bunyan tells us in his book Grace Abounding that he endured an agony of repentance for eighteen months. There does not seem to be much room for that today.

Repentance means that you realize that you are a guilty, vile sinner in the presence of God, that you deserve the wrath and punishment of God, that you are hell-bound. It means that you begin to realize that this thing called sin is in you, that you long to get rid of it, and that you turn your back on it in every shape and form. You renounce the world whatever the cost, the world in its mind and outlook as well as its practice, and you deny yourself, and take up the cross and go after Christ. Your nearest and dearest, and the whole world, may call you a fool, or say you have religious mania. You may have to suffer financially, but it makes no difference. That is repentance.

The false prophet does not put it like that.
He "heals the hurt of the daughter of my people slightly", simply saying that it is all right, and that you have but to "come to Christ", "follow Jesus", or "become a Christian"."

From: Studies in the Sermon on the Mount, Martyn Lloyd-Jones

makes you wonder why guys like Bill Hybels and Rick Warren would partner with him...check out video:

This is what happens when churches become bored with Christ:

Are Churches Replacing Theology with Ecology?

“In recent years, some in the church have sought to gain the public’s ear through the greening of traditional doctrines, and Christ the Savior is fast becoming Christ the environmental activist...

It appears that, for many church leaders, the project of saving the planet offers more opportunities for reconstituting rituals and symbols than the saving of souls.”

The State of Present Day Evangelism

This sermon by A.W. Pink (1886-1952) is so relevant to today's condition of Evangelicalism that you would have thought he had visited us in a time machine and went back to write about it.

Here is an excerpt:

"Once a man makes the conversion of sinners his prime design and all-consuming end, he is exceedingly apt to adopt a wrong course. Instead of striving to preach the Truth in all its purity, he will tone it down so as to make it more palatable to the unregenerate. Impelled by a single force, moving in one fixed direction, his object is to make conversion easy, and therefore favorite passages (like John 3:16) are dwelt upon incessantly, while others are ignored or pared away."

WHEN YOU SPEAK ABOUT CHRIST...

WHEN YOU SPEAK ABOUT THE LORD JESUS CHRIST, DON'T SPEAK LIKE THIS:

"Roughly two thousand years ago, Jesus was born in a dumpy, rural, hick town, not unlike those today where guys change their own oil, think pro wrestling is real, find women who chew tobacco sexy, and eat a lot of Hot Pockets with their uncle-daddy. Jesus' mom was a poor, unwed teenage girl who was often mocked for claiming she conceived via the Holy Spirit. Most people thought she concocted the crazy story to cover the fact she was knocking boots with some guy in the backseat of a car at the prom."
--MARK DRISCOLL

"We know that it is our good, our joy and rest to be united with the Son of God. As He is our Head, we are His body, so also from Him we hold our life and our salvation and all good. In fact, we see how miserable our condition would be unless we had our refuge in Him, to be maintained under His keeping. However, we could not reach so high (seeing that scarcely can we crawl upon the earth), unless from His side He approached us, and already He had approached in His birth, when He clothed Himself in our flesh and He made Himself our brother. We could not now have our refuge in our Lord Jesus Christ’s being seated at the right hand of God His Father in heavenly glory, unless He were abased as far as being made mortal man and having a condition common with us. That is also why, when He is called “Mediator between God and men,” this title “man” is especially attributed to Him. As also for the same reason He is called “Emanuel,” that is, “God with us.”
--JOHN CALVIN

A Challenge For Pastors 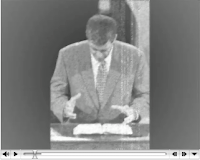 This is a great message from Paul Washer:
CLICK HERE to watch the video.