JESUS DIED for the BIRDS, the FISH and the ENVIRONMENT too 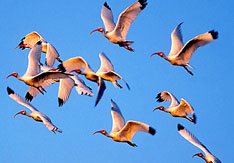 Have you ever heard anyone say that about Christ's atonement on the cross ? Not exactly traditional evangelical orthodoxy is it.

I had never heard of anything like that until one evening in October of 2005 I heard a youth pastor start to go into this bizarre explanation of God's plan of redemption.

This is what this youth pastor told the kids:

"This is much bigger than human souls. God doesn't just want to reconcile humans...He wants to fix and bring peace to animals, to the environment, to mountains and trees, to stars and cities and culture".

I couldn't believe what I was hearing, so I was patient and gave him the benefit of the doubt (seems like we always have to keep doing that). Maybe he just sort of didn't mean exactly what he said or maybe he just didn't make his point very clear and he will get it back on track in a minute.

So I waited as he continued, he went on to say:

My jaw dropped. Needless to say I was very disturbed. This was being taught within an evangelical denomination, a traditionally conservative one at that.

It wasn't until later did I realize that the strange gospel that this youth pastor was teaching these kids was from Rob Bell's book Velvet Elvis. In case you may not know Rob Bell is one of the young mavericks of the EMERGENT church movement. He is the pastor of the church Mars Hill in Grandville, Michigan where it is reported that they have a regular attendance of about 10,000 weekly to their church service. Rob Bell is also responsible for the NOOMA video series geared specifically to the postmodern audience where some of these same concepts are dealt with by Bell.

Why would a youth pastor teach kids that the sacrifice that Jesus suffered on the cross, the precious plan of redemption–God in human form coming down to earth to pay for the sins of humanity also includes animals and stars ? I am still not sure whether or not the animals or trees have to go through the same process of repentance as we humans do and I am curious to know whether or not if these birds or fish are among God's predestined elect ? This is a perfect example of the confusion found rampant all throughout this Emergent movement.

To understand the erroneous teaching of Rob Bell and their misunderstood teachings of the redemption of "all things" pastor Ken Silva of Apprising Ministries has written a two part series on the subject.
PART ONE
PART TWO

This was briefly dealt with in an EARLIER POST here on thinkerup. It also ties into the different views of the KINGDOM OF GOD and just what does the bible actually teach about it.

This is all very important because it is an example of the false teaching coming out of the Emergent church movement. It is finding its way into evangelical churches all over the U.S. and Europe.

Young people need to be aware of it and their parents need to know what their kids may be learning in their youth groups.

We pray that you will be aware of these things.

Thanks for the good post. Hope it's okay if I recommend on my blog? Interestingly, I was working a post on Rob Bell today too. (You don't have to post this.I am really enjoying your blog and have recommended it to others. Thanks again.)

Thanks Carla, we need to continue to contend for the Truth.

Good stuff Kenny. I hope people will take these things seriously instead of just living in ignorant bliss, knowing that their kid is at church no matter what is being taught. "Just so long as they're at church" seems to be the attitude. But that's not enough in the church today. The teachings must be examined at every turn.

Also, to any who read these articles and comments, let it be known that we are NOT directing anything on this blog site to any specific individuals. These articles are an attack on the FALSE DOCTRINE alone. We love the brother but hate the falsehood.

Romans 8:19. The creation waits in eager expectation for the sons of God to be revealed.
20. For the creation was subjected to frustration, not by its own choice, but by the will of the one who subjected it, in hope
21. that the creation itself will be liberated from its bondage to decay and brought into the glorious freedom of the children of God.
22. We know that the whole creation has been groaning as in the pains of childbirth right up to the present time.


Better get back to that bible you claim to believe and read it. It does say creation will be redeemed.

I agree completely. Throughout the Scriptures it states that all will be restored in Christ's coming. I believe He will come, look and judge on how His children took care of what He gave us. If Christ came today He would be disappointed...what a responsibility...we better get to work!!!

I am so thankful that His children, like Rob Bell, are teaching the importance of Creation and our responsibility in it, and that God wants to make all of creation whole.