This clip below from Way of the Master Radio Todd Friel discusses the hermeneutics used by Rob Bell, essentially the Elvis of the Emergent rebellion against Sola Scriptura, and predicts it won’t be long before the answer will be yes to the question asked here: Will Rob Bell Now Follow Tony Jones Out of the Closet?

From the Institute of Creation Research daily devotional. 11-27-08:

"O, Lord God of heaven and earth, our finite minds and feeble speech can never produce fitting praise of Thee. Although our hearts sometime fill with gratitude and overflow with the joy of knowing Thee, we stumble at our innermost thoughts. Please hear the groaning of our spirit as we try to hold Thee to our breast. Please, Father, receive our childlike thanks and our murmured whispers of love.

Help us, O God, to heed the prompting of Thy Spirit in our hearts and to obey Thy Word. We accept the gentle chastening of Thy loving hand and yield to Thy voice.

We gratefully acknowledge that all things come from Thee, and we pray that Thy bounty would supply our daily bread, and that Thy mercy and grace would forgive us our trespasses as we forgive those who trespass against us.

And lead us not into temptation, but deliver us from evil, for Thine is the kingdom, and the power, and the glory, for ever. Amen"

Americans Don't Have a Clue

Two months before the presidential election, Investors Business Daily (IBD) published an editorial entitled "Michelle's Boot Camps for Radicals." It revealed that Barack Obama was a founding member of the board of a publicly funded non-profit organization known as Public Allies, but he resigned when his wife Michelle became executive director of the Chicago chapter of Public Allies in 1993.

The IBD editorial said the organization's mission is to radicalize American youth and use them to bring about "social change" through threats, pressure, tension, and confrontation. On its website, Public Allies said the IBD piece painted an inaccurate, distorted view of their work. But the editorial points out that during the presidential campaign, Obama said, "We've got to have a civilian national security force that's just as powerful, just as strong, just as well-funded" as the military.

Gary Bauer, chairman of American Values, does not believe American voters did enough research on Obama before the election. "One of the things he has talked about is this universal voluntary public service corps. But there are some disturbing signs that this might be another one of these left-wing ideas that have motives behind it that are not entirely reassuring," he contends.

Unfortunately, according to Bauer, the American media did not press Obama to answer questions about some of these questionable ideas and affiliations. "The result is that I think we had one of the most undereducated electorates in the history of our country partake in this election, not knowing the first thing about what the man who's now been elected president has on his agenda," he concludes.

Ablaze With a Heaven-Descended Fire! 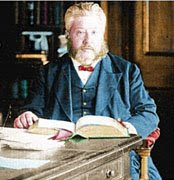 We want also a revival of vigorous, consecrated strength. I have pleaded for true piety; I now beg for one of the highest results of it. We need saints. We need gracious minds trained to a high form of spiritual life by much converse with God in solitude.

Saints acquire nobility from their constant resort to the place where the Lord meets with them. There they also acquire that power in prayer which we so greatly need. Oh, that we had more men like John Knox, whose prayers were more terrible to Queen Mary than 10,000 men! Oh, that we had more Elijahs by whose faith the windows of heavens should be shut or opened!

This power comes not by a sudden effort; it is the outcome of a life devoted to the God of Israel! If our life is all in public, it will be a frothy, vapoury ineffectual existence; but if we hold high converse with God in secret, we shall be mighty for good. He that is a prince with God will take high rank with men, after the true measure of nobility.

Beware of being a lean-to; endeavour to rest on your own walls of real faith in the Lord Jesus. May none of us fall into a mean, poverty-stricken dependence on man! We want among us believers like those solid, substantial family mansions which stand from generation to generation as landmarks of the country; no lath-and-plaster fabrics, but edifices solidly constructed to bear all weathers, and defy time itself.

Given a host of men who are steadfast, immovable, always abounding in the work of the Lord, the glory of God's grace will be clearly manifested, not only in them, but in those round about them. The Lord send us a revival of consecrated strength, and heavenly energy!

Preach by your hands if you cannot preach by your tongues. When our church members show the fruits of true godliness, we shall soon have inquiries for the tree which bears such a crop.

Oh the coming together of the saints is the first part of Pentecost, and the ingathering of sinners is the second. It began with "only a prayer meeting", but it ended with a grand baptism of thousands of converts. Oh that the prayers of believers may act as lode stones to sinners! Oh that every gathering of faithful men might be a lure to attract others to Jesus! May many souls fly to Him because they see others speeding in that direction.

"Lord, we turn from these poor foolish procrastinators to thyself, and we plead for them with thine all-wise and gracious spirit! Lord, turn them and they shall be turned! By their conversion, pray that a true revival has commenced tonight! Let it spread through all our households, and then run from church to church till the whole of christendom shall be ablaze with a heaven-descended fire!"

A worried woman went to her gynecologist and said, "Doctor, I have a serious problem and desperately need your help! My baby is not yet one year old and I am pregnant again! I do not want kids so close together!"
The doctor then said,"OK. What do you want me to do?
I want you to end my pregnancy." she said. "I am counting on your help with this."
The doctor thought for a little while and after some silence, said to the lady, "I think I have a better solution with far less risk to you."
She smiled with a sense of guarded relief.
He then continued, "In order for you to not have to care for two babies at the same time perhaps we could terminate the one you have in your arms."
The lady was horrified. "Doctor! How horrible! Its a crime to kill a child!
"Oh, I do agree, " said the doctor, "but you seemed to be OK with it. I simply thought this would be the least risk to you."

CHANGE? HOPE? This is America's Only Hope!

Our only "hope" is true revival. Our only hope is found in no other than Jesus Christ!

Obama is a Socialist

I know I have been on this theme for a bit now but I think we are in a very dangerous time in our country. I hope Americans realize what is going on with this new administration.

Check out these videos:

The Plot to Overthrow the United States of America?